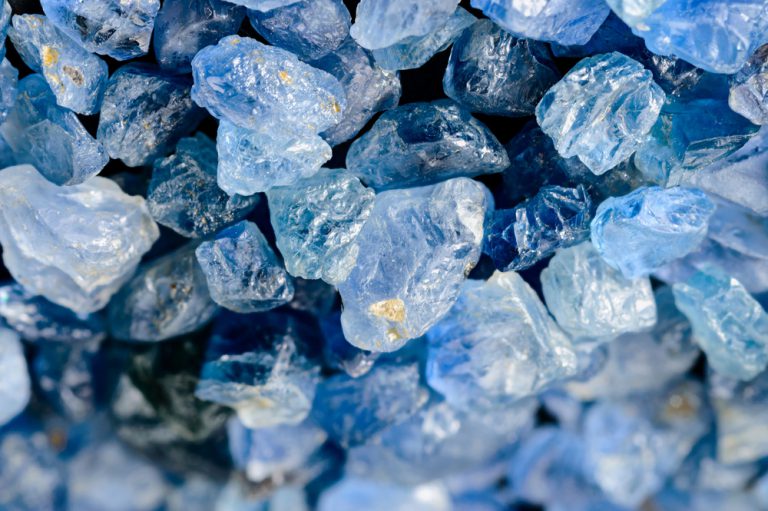 Sapphires are typically blue but can be yellow, purple, orange, or green. They are formed from aluminum oxide (Al₂O₃) combined with the elements of iron, titanium, vanadium, or magnesium. One of their unusual characteristics is a set of unique sapphires with two colors. Pink sapphires can be either rubies or sapphires depending on where they are found.

Gemstone sapphires are judged by their hue, saturation and tone. Hue is the color of the stone while saturation refers to the vividness or brightness of the hue. Tone is the depth and darkness of the color. Pure vivid blue sapphires are the most valuable and have the best hue. Sapphires that are darker with low saturation are less valuable.

Sapphire windows are used as protective devices for lasers, sensors, and cameras due to their superior strength and scratch resistance. These special qualities also make them applicable as viewport windows for high pressure equipment and vacuums. Unlike safety glass, sapphire windows can be extremely thin and still retain their protective abilities due to their high modulus of rupture, the stress at which a material breaks.

Synthetic sapphires are used in dentistry as stems to hold replacement teeth in place. They are clear and appear identical to natural gums as well as being more tolerant to mouth tissue and sense cold or hot exactly like teeth.

In the electronics industry, sapphires are used as an insulator in integrated circuit manufacturing. Sapphires prevent stray currents caused by radiation from spreading to the circuit elements. Since sapphires are inert and resistant to environmental attacks, they are ideal for the wafering process.

Though we generally think sapphires as the September birthstone found in a necklace or ring, they have uses that far exceed any limitations we may place on them.