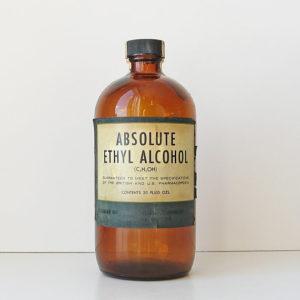 Alcohol is an all-encompassing term used to describe a group substances that include methanol and ethanol, the simplest forms of the compound. It is an organic substance with one carbon atom bound to a hydrogen hydroxyl and is classified as primary or secondary depending on the number of carbon atoms connected to the hydroxyl. The chemical formula for alcohol is C₂H₅OH.

Alcohol production is the fermentation of natural sugar with a catalyst like yeast. As it ferments, starch and sugar turn into carbon dioxide and ethyl alcohol. Fruits, vegetables, or grain can be fermented to make it. The yeast changes the sugar in the foods into ethyl alcohol.

Though we mainly think of ethanol when we are discussing alcohol, there are many constructive uses for it beyond consumption. In the medical field, it is used to counteract the irritations of sprains and joint pain as well as the pain of sore muscles. Alcohol can be used as a disinfectant for contaminated or infected areas.

Alcohol appears or is used in a variety of products such as facial cleaners, cosmetics, astringents, household cleaners, and perfumes. As a solvent, it dissolves oil based products and can be used to clean auto parts. Since it evaporates quickly, it is ideal for cleaning sensitive computer components or robotic equipment used in manufacturing.

The version of alcohol that people keep around the house is isopropyl alcohol or rubbing alcohol. Though rubbing alcohol is stored to deal with cuts and bruises, it has many uses beyond healing wounds and cold sores. Smelly clothing or shoes can be returned to freshness by being sprayed with it.

Methanol is used by the chemical industry for the manufacture of formaldehyde, a compound used to form resin, glues and plastics. Formaldehyde is critical in the production of composite wood products such as cabinetry, countertops, and furniture.

Grades of alcohol are judged according to the amount of impurities. High grade ethanol, used for manufacture beverages, has the least number of impurities while the ethanol used in vehicle fuel has the highest amount.

Though we may mainly think of alcohol as a beverage, the number of uses goes far beyond that limited definition.