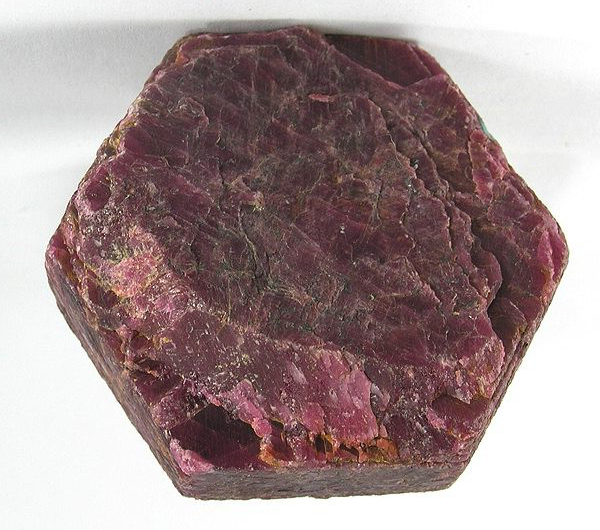 Corundum is a natural form of aluminum oxide and is the third hardest natural substance after diamonds and moissanite. The chemical formula for corundum is Al2O3. It appears in nature as colorless. When impurities are present, it can have every color of the rainbow. Corundum is found everywhere in nature as igneous, metamorphic, or sedimentary rock. As common as it is, there are very few large deposits  though Russia, India, Zimbabwe, and South Africa are known to have significant amounts.

A variety of natural settings, rich in aluminum oxide, produce corundum. It is most often found as a lightly colored igneous rock such as pegmatites, syenites, or Nepheline syenites. In metamorphic rock, it is derived from aluminous or carbonate sediments. Regardless of the setting, it is very difficult to find, which limits its use.

Though corundum is used as a gemstone, it has other qualities that make it useful in other industries. Since it is very hard, it is perfect as an abrasive for grinding optical glass and polishing metals. On a smaller scale, it can be found in sandpaper and grinding wheels. Recently, it has been used as an agent to reinforce concrete floors and surfaces.

Corundum is exceptionally hard with a hardness of nine on the Mohs Hardness Scale. Its common name is corundum, but it is also known as ruby and sapphire with deep red colored corundum being ruby while blue colored is sapphire. Corundum without any color is white sapphire.

The problem with using corundum as a source for manufacturing is the difficulty in finding reliable naturally occurring amounts since it is so rare. To circumvent that problem, several processes are used to synthesize it from calcined bauxite that include flame fusion and hydrothermal synthesis, an expensive and time consuming process. The quality of the gems derived from synthesis depends on the process used to manufacture them with flame fusion being the least expensive producing the lowest quality stones.  Hydrothermal synthesis creates the highest quality stones by growing them under heat and pressure for days or months.